When is Ukrainian Christmas and why

When is Ukrainian Christmas and why? What a strange question! All Christians celebrate Christmas on the same day! Or do they?

These days, every shop window tells you it’s the holiday season! Thanksgiving is right around the corner, then there is Christmas and New Year’s, right? Nope, not in Ukraine.

The Thanksgiving situation is clear: I mean, no pilgrims – no celebration. But what’s with Christmas Day? Unlike America and the vast majority of European countries, Ukraine celebrates Christmas on the 7th of January. Only on this day we finally get sober after New Year’s Eve and are ready for more festivities. Just kidding 🙂 There’s a bigger story behind it.

It starts with the introduction of the Gregorian calendar in the end of the 16th century. At the time, Ukraine was a part of The Polish–Lithuanian Commonwealth . The situation between the Catholic and Orthodox churches was tense. Poland wanted Ukraine to change its religion but Ukrainians were persistent. That’s why when the Catholics decided to change calendars, the Orthodox Ukrainians decided to stick to the Julian one as a sign of resilience.

As centuries passed by, Ukraine gained its independence for a short period in 1918 (this happened before the USSR was created). Then, the civilian calendar was changed to the Gregorian one. However, the Orthodox church has bigger fish to fry and keeps counting the days their own way. This is also the reason we have so-called ‘Old New Year’ on January 14. It isn’t as big as the one in December, but still nice.

So if you want to see how Ukrainians celebrate Christmas, don’t rush. Eat your Christmas cookies at home, greet your Santa, kiss your loved ones on New Year’s Eve – and only after your own holiday fever is over, come to Ukraine. We’ll be waiting at home with our families and 12 traditional dishes. It doesn’t matter if you’re religious or not, this is a sacred tradition which lives throughout generations. Believe me, you don’t want to miss Ukrainian Christmas dinner on the 6th of January.

Traditionally Ukrainians fast before Christmas, so the dinner is without any animal products. We were vegans before it was mainstream 🙂  And breakfast on the 7th, ooh! Just thinking of it makes my mouth water. 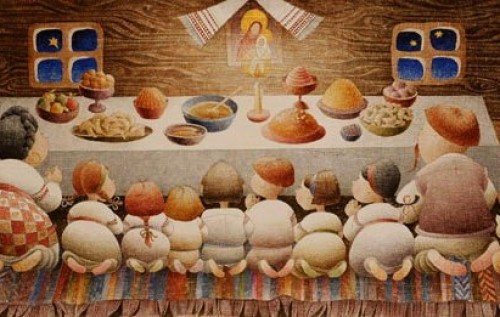 In case you have already bought your tickets for the end of the year, no need to worry. Since 2017, the 25th of December is a recognized public holiday too, so you can still catch a glimpse of Ukrainian holidays. There is no wrong way to celebrate Christmas 🙂

Check our 1000 most common words in Ukrainian with the interactive flashcards.

Also, you can learn Ukrainian step by step wherever you are with our free Ukrainian Lessons Podcast.