This is the Ukrainian Lessons Cultural Guide, in which we gathered the best places to visit in Lviv to better understand the city!

Lviv is a city of various cultural sights: it has belonged to six different countries, and each of them has left its own mark on the city map. Lviv keeps the memory of Kyivan Rus, Polish, Austrian, German, and Soviet times. And now it is a Ukrainian city 💙💛

This unique cultural mix makes Lviv absolutely worth visiting! You will see that people of different nationalities who live here, including Ukrainians, Poles, Armenians, Germans, Russians, and Jews, have all contributed to the overall view of the city.

Look at our Food Guide to Lviv to discover the best places to eat, drink, and relax! For me, this is one of the most beautiful cathedrals in Lviv. Despite its location in the center of the city, this cathedral is not full of tourists. It is almost 300 years old, but the building looks like a newly built one, only the old baroque stairs remind us of its real age. Собор Святого Юра is one of the main holy places of the Ukrainian Greek Catholic Church, which is extremely popular in the Western part of the country.

Also, in this cathedral, you can see the oldest church bell in Ukraine, which was created in 1341. Собор Святого Юра is built in baroque style, but it has quite minimalistic architecture, which makes it even more beautiful. This is an old church which had been under renovation for a long time. Now this building from the 14th century is open to the public! But – you can’t wear short skirts, shorts or short tops to be able to enter this place. Nevertheless, it is really worth visiting. There are many authentic and unusual sacred images and the atmosphere imbues you with a feeling of holiness. It is quite dark there, but that creates an even more special atmosphere. By the way, this is the only cathedral of the Armenian Apostolic Church in the whole of Western Ukraine.

My favorite фреска – fresco painting here is “The Funeral of St. Odilon”. Look at this picture attentively (to the left), and you’ll see many mysterious elements. If you come to Lviv by train, you’ll see this church after five minutes in town. It is very close to the railway station, so it is an architectural landmark of the city. Earlier, this was a Catholic church, so its style is neo-gothic. Церква Святих Ольги та Єлизавети was built in the beginning of the 20th century in honor of the wife of Austrian emperor Franz Joseph I. Now it is a Greek Catholic church. The interior of the building is very light, and there’s a lot of free space. Moreover, this is the tallest building in the old city.

However, it is open not that often, and it’s better to go there when divine worship starts. You can look at their schedule here.

It is known among Lviv citizens as a Jesuit Church. This is the first baroque building in Lviv, which was built in 1610. As with the Armenian cathedral, this church has had a long story of renonvation and was opened just a couple of years ago. In Soviet times there was a library warehouse, so many paintings were ruined.

Today, this place is very calm and spiritual. You can come in, take a chair, and enjoy listening to amazing organ music. There is also a building of a Jesuit Collegium near the church, where a famous Ukrainian hetman Богдан Хмельницький studied.

Are you coming to Lviv or any other Ukrainian city soon? These Short & useful Ukrainian questions for your trip – and a cheat sheet! – will definitely help you to get around. This is the first pharmacy in Lviv, which is called «Під чорним орлом» (Under the black eagle), and it is still in operation. Moreover, it is one of the most touristic museums in Lviv. There are more than 3 000 showpieces, and each of them has its own history. There is a lot of space, and you can walk around old pharmacy instruments and drugs freely. If you want to discover Ukrainian art of past centuries, you should visit this place. There are so many pictures, books, traditional costumes, and other parts of Ukrainian culture that it is difficult to even remember them all. Sometimes there are exhibitions of modern Ukrainian artists in addition to the permanent collection. This museum is located in the old prison, where three countries kept political prisoners for a long time. Polish, German, and Soviet governments used this place for torture and murders. Now it is the National Museum-Memorial of Victims of the Occupation Regimes. There are no frightful showpieces, but the spirit is unforgettable. You will be shocked at the evil which happened here.

You can also look at the monument of the victims of communist terror near the museum. 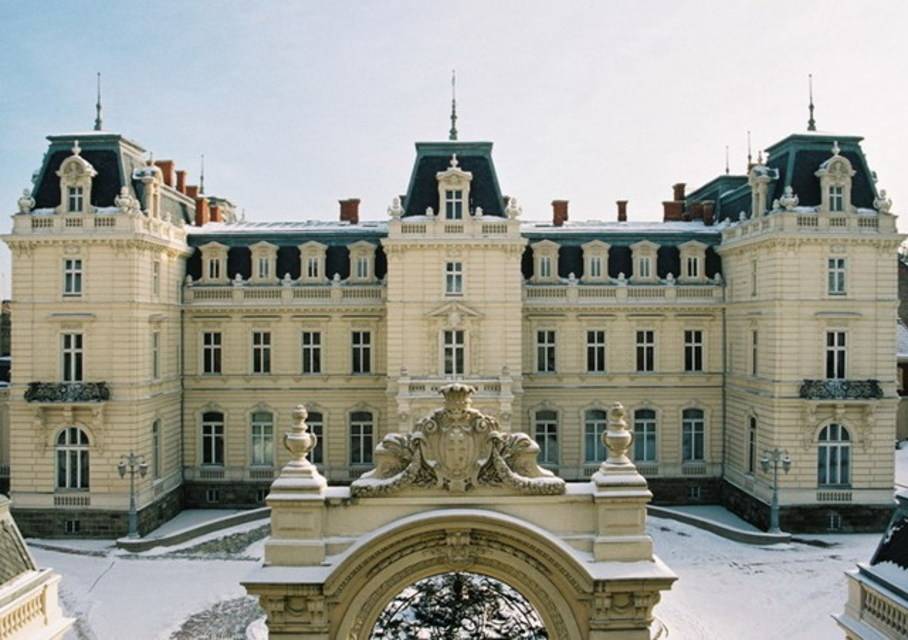 Nearly 150 years ago, Палац Потоцьких was one of the central places of Lviv cultural life. Count Potocki built it for hosting huge balls. Now it is an art gallery. You can admire beautiful pictures of Ukrainian, Polish, Austrian, and other European painters here. Most of them were created in the 18th and 19th centuries.

Personal guide: 140-250 UAH (depending on the number of tourists). The cost also varies by language. Besides Ukrainian, you may order Russian, English, German, Polish, Italian, French, and Spanish guides. 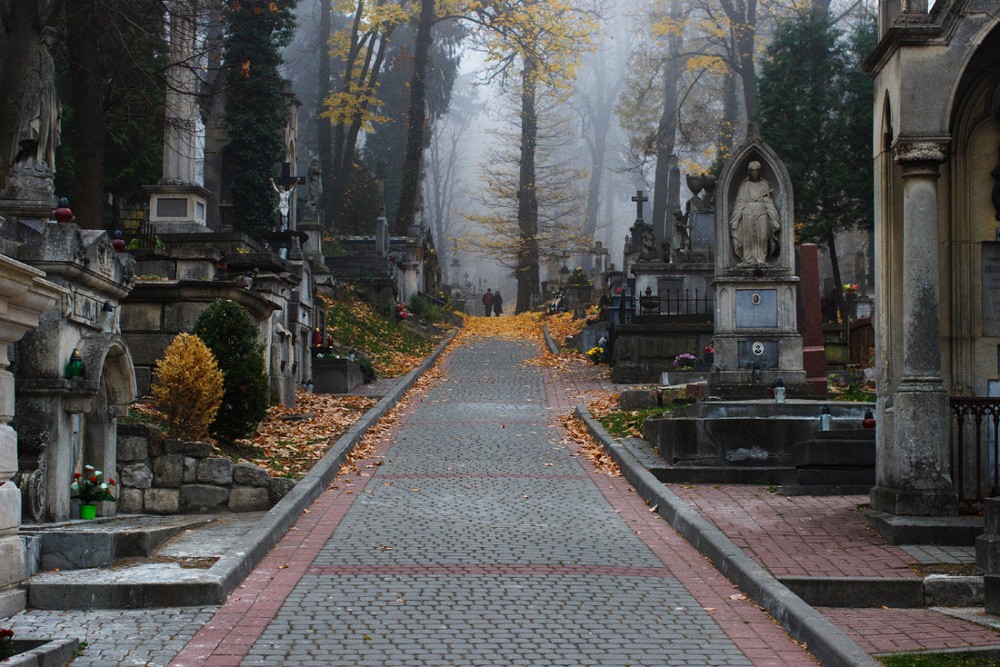 This is not a fun place, but it is really beautiful. Many famous Ukrainian people are buried here. There are many tombs of Polish aristocratic families and famous Ukrainians. Some of the most praised Ukrainian writers and poets, Іван Франко, Маркіян Шашкевич and Грицько Чубай, have their graves at Личаківський цвинтар, alongside many singers, scientists, and artists.

Are you just at the beginning of your language learning journey? Then you might like our 7 Reasons to Learn Ukrainian article 💙 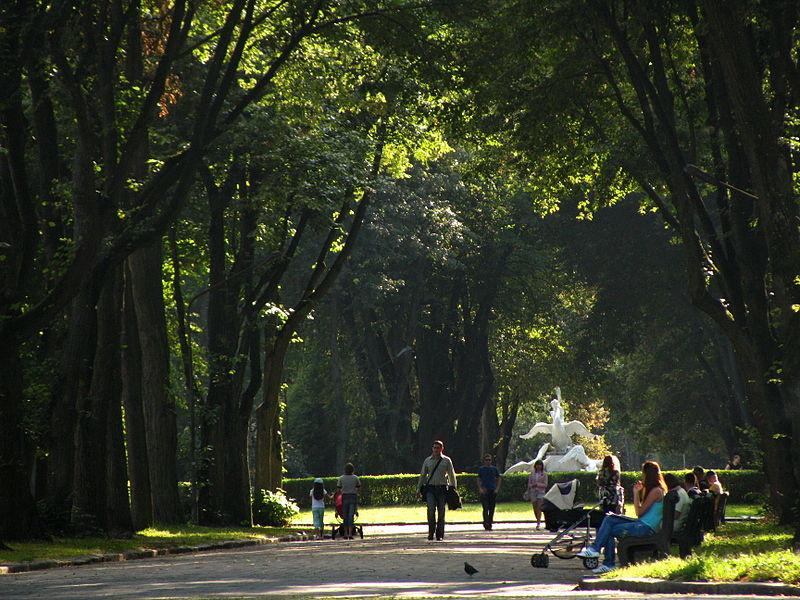 This is one of the oldest parks in Lviv, and it was the most beautiful park in the country in the early 20th century when the city was a part of Poland. It has a wide variety of plants and animals. You can even feed swans near the lake. Стрийський парк is a great place for resting and enjoying the wonderful nature.

Do you remember Іван Франко? He was a famous Ukrainian writer, who is buried at Личаківський цвинтар. There are many places in Lviv named in honor of him. This park is much smaller than Стрийський парк. However, it is located in the very center of the city, near the main Lviv university, which is also named after Іван Франко. That is why you can find many hostels around there. It is far from the roads, so it is pleasant to wake up and go for a walk to парк імені Івана Франка (it is called парк Франка for short). If you decide to visit Личаківський цвинтар, you should probably go to this park. Its name speaks for itself because it comes from the word гуляти – to walk. It is a great place for picnics, too. You can also see the river Пасіка here, which is a feeder of Lviv underground river Полтва. A couple of centuries ago Полтва was a beautiful and important part of Lviv, but now it flows under the Opera Theatre and nobody can see it. If you want to have a long walk and get in touch with Ukrainian national culture, go to Шевченківський гай. It is an open-air museum of folk architecture and rural life. That is why you can combine the useful with the pleasant – walk and study. There are many old Ukrainian houses from all over the country. They are totally authentic, and the interior is saved from the previous centuries. You may also become familiar with this culture with the help of various activities like clay modeling, archery, horse riding, and trying tasty Ukrainian traditional dishes.

In need of basic Ukrainian phrases for your trip to Ukraine? We have 14 – plus a downloadable cheat sheet! 😁

If you have enough energy and time to go a bit further than Lviv, take out a day for visiting these castles in the Lviv suburb. You can go to all of them in one day. It is a traditional, but really attractive tourist route. Order the special tour if you don’t want to deal with transportation. There are a lot of such offers on the internet. Just google it! 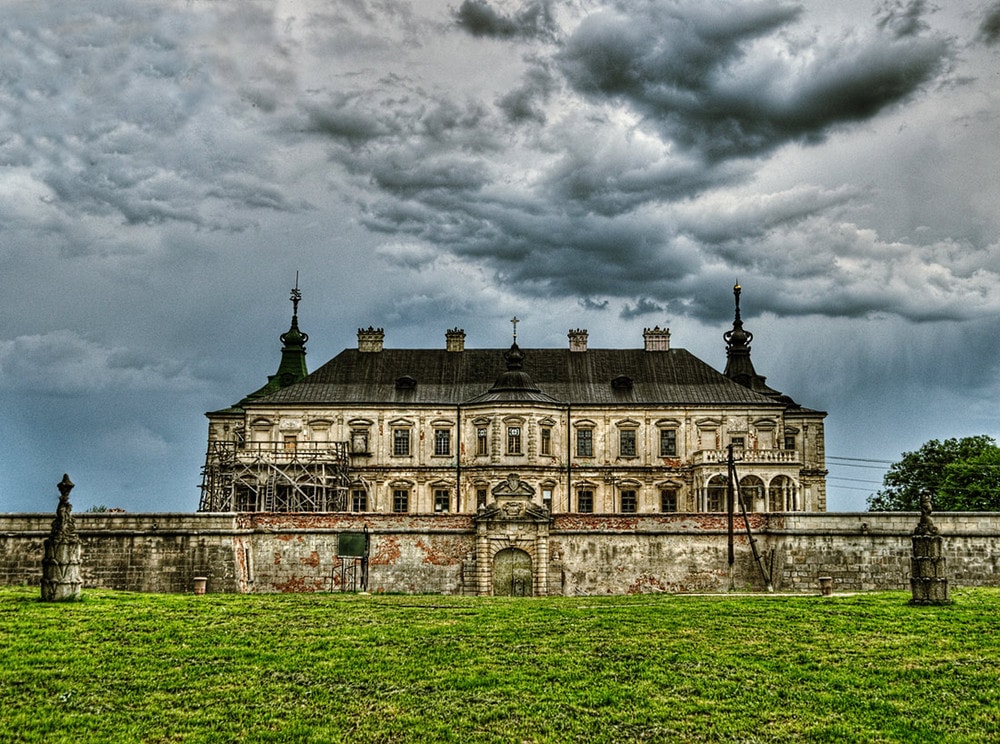 This place was called French Versailles among Lviv citizens. It was built in the 17th century for Polish hetman Stanisław Koniecpolski. There is also a wonderful park here, where you can enjoy a walk. Now it is in the process of renovation, but you can still visit it. Reconstructed from its ruins, Олеський замок is the most famous castle in Lviv. It is one of the oldest castles in the whole of Ukraine: it was built in the 13th century. There was a huge park around the castle, but after so many years it looks like a forest. Some organizations are trying to create a new green space there, and now it looks much better than before. If you are tired of ancient ruins, go to Золочівський замок. In spite of the fact that it was built in the 17th century, it has a great appearance in comparison with the other castles. There was a big group of buildings, and most of them remain undamaged. One of the most famous and fancy places here is Китайський палац – Chinese palace, which is now the Museum of Eastern Art. 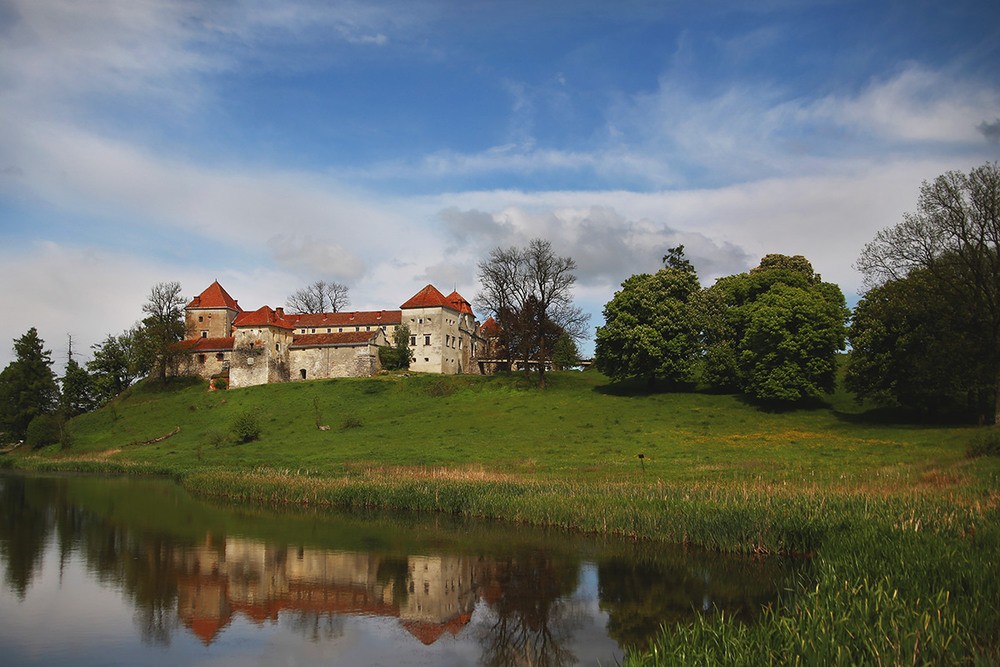 It is much younger than Олеський замок. This place was built in the 15th century as a defensive building. That is why Свірзький замок was ruined many times, and each time it was rebuilt for a new battle. However, the Catholic church from the 15th century remained safe, and now we can look at its old beauty. The biggest castle among these five is Старосільський замок. It is not renovated, so you can see mostly walls and towers here. However, it is one of the most powerful Ukrainian military fortifications. It was ruined only once in the 17th century, though it was built in the 16th. After that battle, no one could manage Старосільський замок.

Driving to Lviv by car? Listen to our “Conversation on the road / Driving in Ukrainian” podcast episode, it will only take you around 5 minutes 😉 The most famous Lviv theater still receives visitors and artists. You can watch not only well-known operas, but also listen to symphonies, and enjoy other musical events here. The theater has a neo-baroque interior, which gives you the feeling of royalty and loftiness. Look at the schedule of the events here and enjoy the beauty of art! 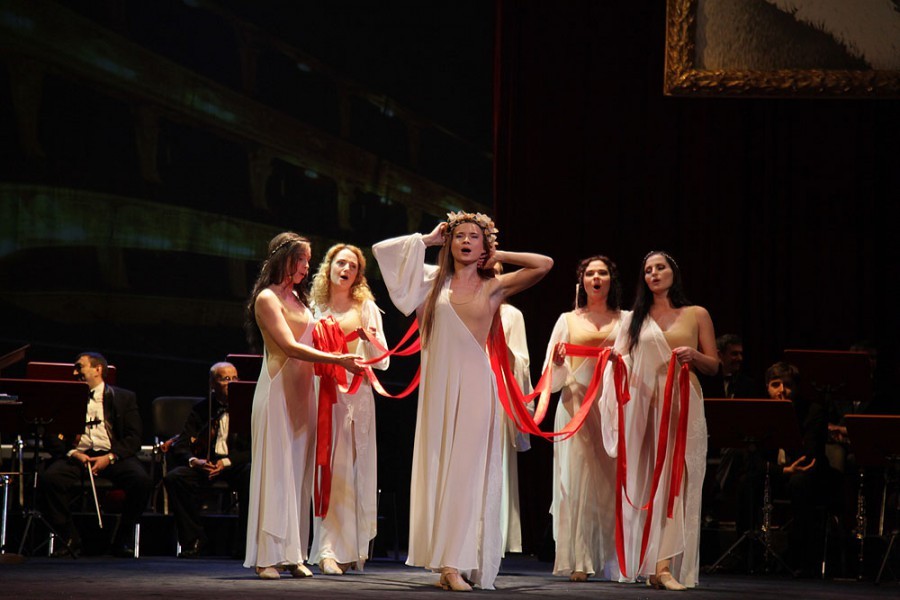 If you prefer drama plays, watch them at this theater, and improve your language skills while finding out more about Ukrainian culture. They usually perform Ukrainian plays, but there are some plays of foreign authors, too. However, all of them are in Ukrainian, so be ready to listen carefully. Find the plays and tickets here.

Phew! This city is considered the cultural capital of Ukraine, so no wonder there are so many places to visit in Lviv! I hope you enjoy your stay in this magical city, and that you’ll get the chance to see how incredible all of these cultural spots are for yourself 😊

Are you just starting to learn Ukrainian?

Olesia is a student of the Master program in Literature at Kyiv-Mohyla Academy (Kyiv, Ukraine). She is a private Ukrainian language teacher, translator, and copywriter. Olesia is interested in traveling and handmade, but most of all she likes learning foreign languages.